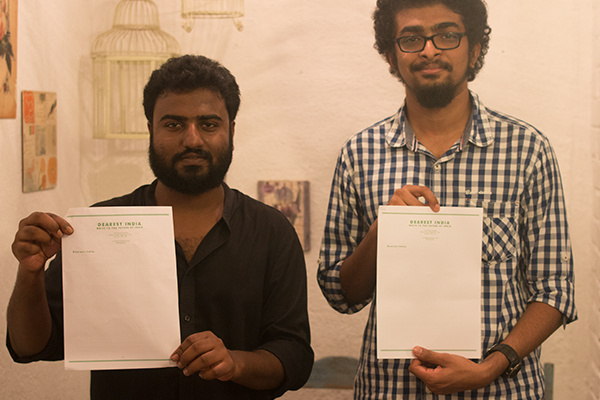 We are bringing a change in our government by collecting letters of expectations from India Aug 10, 2016

Dearest India is inspired by the resolving of the unrest in Scotland, where everyone was confused about whether they wanted to separate from Great Britain or not. What they decided to do was write letters to their government about what they felt and wanted from their country. This action united them.

We liked the idea, and we wanted to do something like it. We want to create a change by using this idea. Our plan is to get every kind of Indian – caste, gender, age, religion, status, designation no bar – to write and just express what they expect from our government. Once we have these in place, we want to publish it as a book, and present it to the Prime Minister, Narendra Modi.

We already have a significant collection of letters, from young adult students to IES officers. The support we have received is overwhelming and heartwarming. It is important to believe in yourself as much as people believe in you, for something this big and impactful to actually materialize.

It’s a crowd-sourced campaign. We have friends from Delhi and Kerala helping us out with this creation. All the proceeds that we earn post-publishing the book will be used in promoting and increasing literacy. So it’s a non-profit movement, really. We’re planning on getting it all wrapped up and published by December.

What we’re hoping for is a change in our country based on the perspectives of its citizens. “The future of the country, by the people of the country.” That is what we are aiming for.