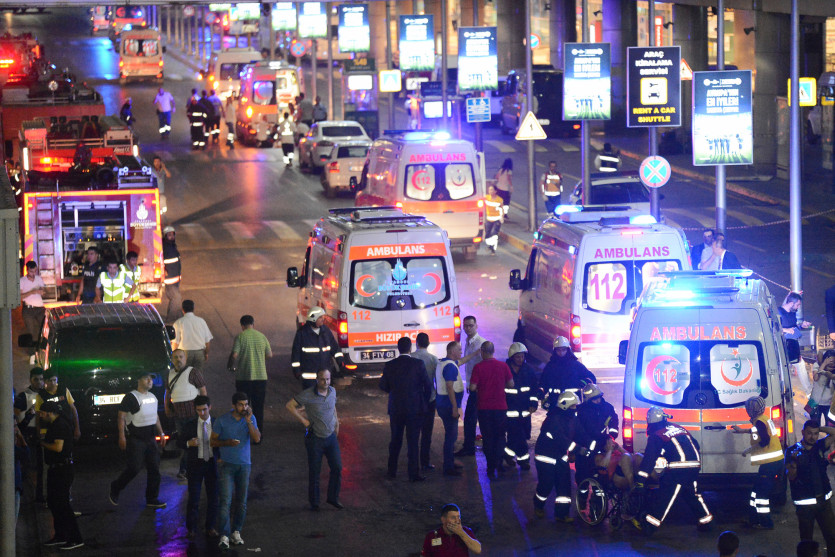 Istanbul Turkey Istanbul Airport Turkey Prime Minister terrorist bombing attacks terrorist bombing
1108 SHARES
Three suicide bombers opened fired then blew themselves up in Istanbul’s main international airport on Tuesday, killing 36 people and wounding close to 150 people. Incident The attackers arrived at the airport in a taxi and blew themselves up after opening fire. One attacker opened fire in the departure hall with an automatic rifle, sending passengers diving for cover and trying to flee, before all three blew themselves. The Istanbul Police fired shots to try to stop two of the attackers just before they reached a security checkpoint at the arrivals hall, but they detonated their explosives. The victims included some foreigners and many of the wounded have minor injuries but others are more badly hurt. Roads around the airport were sealed off for regular traffic after the attack and several ambulances could be seen driving back and forth. Turkey has suffered a spate of bombings this year, including two suicide attacks in tourist areas of Istanbul blamed on Islamic State, and two car bombings in the capital, Ankara, which were claimed by a Kurdish militant group. Pictures posted on social media showed wounded people lying on the ground inside and outside the international terminal. Hrithik Roshan and his sons Hreehan and Hridhaan were at the Istanbul airport hours before the suicide bomb attack.   Turkey’s Prime Minister Binali Yildrim said the three bombers were responsible for the attack and all indications suggests the Islamic State group was behind it. "The findings of our security forces point at the Daesh organization as the perpetrators of this terror attack," Yildirim told reporters at the airport, using the Arabic name for IS. "Even though the indications suggest Daesh, our investigations are continuing."  “It is meaningful that this heinous attack came at a time when we have become successful in the fight against separatist terrorism ... and at a time when we started a process of normalizing ties with our neighbors,” Yildirim said. Justice Minister Bekir Bozdag said close to 150 were wounded. Defence Secretary Philip Hammond said he was "shocked" by the incident and that "we stand ready to help." Turkish Prime Minister Binali Yildirim has called for global co-operation in tackling terrorism.   #PrayforTurkey
Istanbul Turkey Istanbul Airport Turkey Prime Minister terrorist bombing attacks terrorist bombing