HOME / TRENDING / GOT SEASON 6 FINALE: 6 MAJOR SPOILERS THAT WILL MAKE YOU GO LIKE “WHAT JUST HAPPENED”! 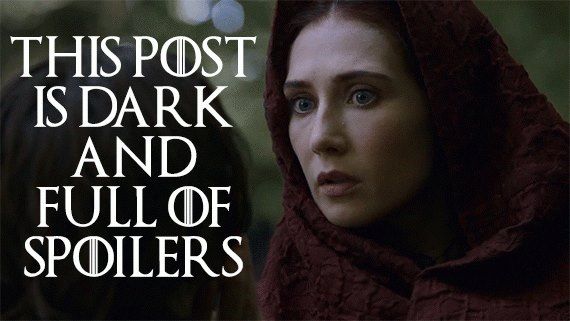 for the sixth season of Game of Thrones! Spoilers highlights
1234 SHARES

The Game Of Thrones Season 6 Finale episode is finally here. The episode titled The Winds Of Winter has a running time of 69 minutes. The episode has smoothly managed to exceed all our expectations and has left us dumbstruck! Revenge, Revelation, and the brutal suppression of the show’s cast was all perfectly blended into one of the best episodes of the fantasy drama.

We don’t even know where to begin. The sheer amount of incredible moments in the episode has left us reeling. Its way too much information to take: so much happened, so many died.

The clear theme in the finale episode was vengeance. Here are 6 Major Highlights from the GOT season 6 finale. (Major Spoilers ahead.)

1. Cersei Lannister has the clearly ruled the episode. She ascends the Iron throne but under tragic circumstances. The body count of this season’s finale was extreme, even for the likes of Game of Thrones, and Cersei's attempt to keep Tommen from being one of those bodies failed. There is no king. There is no High Sparrow. The Sept of Baelor is now the Sept of No More, if you get our meaning. It's all ashes.

 Cersei seized control by eliminating the High Sparrow and his zealot followers who had eliminated her. She eliminates both House Tyrell and the Faith though Margaery Tyrell’s death would be one of the most shocking deaths on the show.

 Cersei has seemingly made everybody comfortable with the idea of a Queen on that throne.

2. Jon Snow is crowned the king of the north and Sansa is genuinely happy for him.

Bran’s Visions lead to the confirmation that Jon snow is not the illegitimate child of Eddard stark but his nephew. R + L=J, One of the most popular fan theory about the books finally came true. Just like everybody guessed, Jon is the son of Rhaegar and Lyanna.. What we don’t know is whether or not Rhaegar had taken Lyanna as a wife, thus making Jon the legitimate heir to the Iron Throne, or whether they were unwed lovers, thus making him even more of a bastard than before.

3. The witch Melisandre was banished for her role in the death of young princess Shireen, one of the fifth season's most stomach-turning interludes.

4. House Frey: Arya Stark kills the Frey boys and then goes on to slit Walder Frey’s throat just like he slit her mother’s. It was in many ways satisfying to see Walder Frey payback for The Red Wedding.

5. Daenerys has named Tyrion as the Hand of Queen. It is nice to see Daenerys on her way to Westeros after six seasons. Only Jorah Mormont and Daario Naharis, the two men who love her, won’t be making the journey. We are glad to see Daenerys heading for Westeros at last, but we are with Daario on this one: we pity the Lords of Westeros. They have no idea what’s coming.

6. Lady Lyanna Mormont is the best character the show introduced this season, We hope she lives forever.

Season seven of Game Of thrones will begin as a much different show, with many fan favorites dead. But winter isn't just coming — it's here. And when the dead arrive and the Wall inevitably falls, what will they find? Seven kingdoms united against them, or at each other's throats? Who'll be smiling then?

Already in the Game of Thrones world? 9 Incidents that suggest you actually are.

for the sixth season of Game of Thrones! Spoilers highlights